10 Years of Bristol, 9 years a Druid and 7 years aware of Balanced View. I have recently moved back to London. This has prompted lots of reflection recently. One decade that spanned across Saturn’s return. 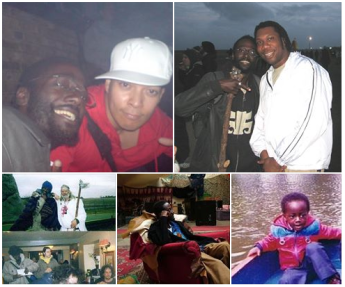 10 Years of Bristol, 10 years ago I left London and moved to Bristol. I had been getting depressed working temp jobs and after a summer of performing poetry at festivals that summer I decided I would move to either Brighton or Bristol and focus solely on performance. The I-Ching said “the South-West will be fortunate”. Decision made. It was fortunate.

9 years a Druid, 9 years ago I had been in Bristol for a year and on Spring Equinox 2006 I was knighted by the man who calls himself King Arthur (for the record, yes, I also call him King Arthur), and I was dubbed a Shield Knight and Bard. A Bard is a writer and performer who spreads knowledge and wisdom. A Shield Knight is a recognition of an original incarnation. I have remained a part-time Druid, but I tend to find special places to be on Solstices and Equinoxes and I do not believe it is a superstition, I believe it is a science.

7 years aware of Balanced View. Balanced View is a training in the nature of the mind. When I first encountered the Balanced View teaching I was in a confident place. I had been in Bristol for 3 years, I had successfully avoided and replaced the things that brought up my anxiety and depression, I had avoided my parents, I had avoided jobs that force me to socialise with people that didn’t share my opinions and by living with squatters, hippies, musicians, activists, political people and spiritual people I had surrounded myself with people who supported me and my ideals. Which has it’s positives, but these positives were temporary. I had changed my mind and changed my being, but not to the extent with which I could live with people I disagreed with or work with people I disagreed with without encountering anxiety and/or depression. When I first encountered the Balanced View teaching I rejected it, because I did not think that I needed it, and after curing my depression by avoiding and replacing I was highly suspicious of any organisation that offered help. I attended the very first Balanced View classes that were held in Bristol but I dropped out. Since then I have witnessed many friends get involved with Balanced View and most of them have increased in confidence, ability, are less held back by their perceived ‘weaknesses’ and are more fuelled by a knowledge of their strengths, gifts and talents. I have since attended more Balanced View trainings and they have been invaluable with learning more about myself and being content and productive with anxiety and depression. My initial reluctance is more complicated than just a misplaced confidence at the time, but the source of my resistance was complex and discussing them in public may hamper other people’s experience of it. I can simplify by saying that I felt that it did not have what I would call an authentic lineage but I was simply wrong, it does have what I would call an authentic lineage and they had good reason for not talking about it early in it’s development. I am not qualified to tell you what Balanced View teaches but what I can say is nothing has helped me deal with anxiety and depression quite as efficiently as Balanced View. http://www.balancedview.org

But no, no it isn’t. It doesn’t even mention the Tibetan monks, the Sufi chants, the Tasmanian Rainforest or the Canadian immigration cell (long story short – internet romance + no visa + honesty about financial situation = Canadian immigration cell.) It doesn’t mention meeting KRS-One in Stonehenge, it doesn’t mention meeting a Tibetan lama in a hostel in Barcelona, and it doesn’t explain how these experiences made me convinced that I had a ‘spiritual’ path but were inconclusive in giving that path a definition or an independent nature from any other kind of life. It’s all spiritual, we’re all spiritual, if you believe in spirit at all. It doesn’t explain how even these magical moments were also source of ego, pride and ultimately depression. It doesn’t explain how I lived with activists in a rainforest in Tasmania until the fear, the racism, the misplaced guilt for an activists suicide and an a realisation that I did not wish to impose my will on others, a realisation I could not express through fear of ostracisation led to both fear and depression yet again.  It doesn’t mention any of the people who helped make it special, Craig r Ninjah, Adam Place, Michael Stanton, Ben Tree, Daniel Waples, Dav, 12 Volt Joe, Louise Stewart Daisy, Danielle, Big Rick, Bouncing Tim (and that’s just a list of people who let me sleep on their couch, or in their van or caravan off the top of my head – Adam Place was actually the first person I lived with in Bristol and is now the proud inventor of the AlphaSphere – the best new digital instrument that you want.) http://www.alphasphere.com/
It doesn’t mention how Coed Hills became the place to spend solstices after Stonehenge and how a little-known stoney Longbarrow became home for a small tribe after that. It doesn’t mention how my values and the values of mainstream society have been worlds apart, I have found it hard to care about money but care alot about honour and love, yet even when I have lots of honour, love and respect I can sometimes let the way I believe society would perceive me affect my self esteem in a negative way. It mentions the depression but it doesn’t explain it. If I don’t make lots of money am I a failure? No. Well yes and no because there is no such thing as success, failure, honour, love or money, they exist only as abstract concepts. There is also no such thing as me, I’m another abstract concept. And the abstract concept that there are no real things, just abstract concepts, is one I started to grasp when I read the Tao Teh Ching aged twelve (the root of taoism which is the root of the Yin-Yang symbol), and one I experienced directly via shamanic techniques in 2006 but despite these realisations Balanced View was the training that provided a technique to see this perception for short moments many times. This perception has not yet become continuous.

What follows are various shades of things I have said about the past ten years since I moved back to London a month ago.

Nov 9
I’ve been on a personal, emotional, psychological and spiritual journey for the past year particularly but my whole 10 year pilgrimage to Bristol, Glastonbury, Tasmania and beyond was all of the above really. I’m back in London putting my heart and head back together and studying to be a Steiner school kindergarten teacher now.

Nov 10
Loads has happened since then, I was working three different youth work jobs in Bristol but none of them full time enough to pay my bills and I started a part-time Steiner school course in London. My financial issues didn’t help my depression, my options became take any job offered or move out and I chose to move out in October so I am currently living with my mum (rent free) in London…

Nov 11 (13 days ago)
I often feel like I’m just one anxiety peaking difficult phonecall from completely giving up on this shit and dropping out of this corrupt and hypocritical ‘society’ again, but I should at least save a lil cash before I do that next time and I’d like to finish my Steiner school course too. But my inability to cope with little things like talking to banks or HMRC without getting emotional (or angry) makes me feel like I’m really not made for modern western society, which then makes me feel like a loser so then the depression kicks in cos I ain’t built for this shit and then it all starts to spiral. So, short moment. Everything’s perfect. Even the anxiety and depression. And keep it moving. There is no need to let my self esteem be affected by ability or willingness to participate in ‘the game’, but in reality I am able to do anything. Short moment. None of this matters. Give it a day or two and I’ll be jamming with lovely people (or myself) and have completely forgotten that a couple of phonecalls made me feel like this.

Nov 11
I spent half n hour on hold to the HMRC just trying to find out what the letters they’ve sent to my old house are about, expecting fines for not doing a tax return or responding to their letters or something. And in the end I just hung up cos I was sooo anxious waiting. I often feel like I’m just one anxiety peaking difficult phonecall from completely giving up on this shit and dropping out of this ‘society’ again like when I was squatting and living with activists, but I know I want to save more cash before I do that next time and I’d like to finish my Steiner school course too. But my anxiety with talking to banks or HMRC makes me feel like I’m really not made for modern western society at all sometimes, which then makes me feel like a loser who can’t cope with modern day life so then the depression kicks in and then it all starts to spiral. I got 9 quid in the bank and I’m planning to spend 5 of that on getting to Bristol this weekend lol My mum will probably lend me cash for travel and training but that doesn’t help my self esteem either. I know it’ll all change.

Nov 12
I have been living my dreams and thinking up new ones
I wanted to be famous rapper at first. I succeeded in becoming a semi-famous rapper and a semi-famous poet.
I always aimed to be respected by the festival scene and the squat scene, by spiritual people and by the grassroots people. and I achieved that. The Druids ask me to perform at Stonehenge on the Solstice and I have hosted dance stages at Glastonbury.
If I aimed for money instead of love and respect maybe I would have earned more money. But I got what I wanted – love and respect some days that is enough, some days my self esteem wants more. Now my new dream is to qualify as a Steiner school teacher so I can inspire the next generation AND earn enough to travel .
that was the VERY short version haha

(29 minutes ago)
I just had negative emotions associated with London cos I was a temp in offices suffering from depression 10 years ago before I moved to Bristol and became a rebel poet squatter suffering from delusions of grandeur and avoiding the appearances of depression and anxiety by surrounding myself with likeminded people. Now I’m back in London and I’ve found balance – I still suffer from depression and anxiety but I don’t avoid them by surrounding myself with likeminded people, I just outshine them by telling like minded people that I’m anxious and depressed and realise that it actually doesn’t matter. Kev’s past ten years in one easy paragraph (minus the druids, the anarchists, the broken hearts, the epic romances, spoiled goddesses, buddhism, taoism, sufism, balanced view and back to {freestyle} buddhism and an extremely long list of ridiculous coincidences.) :-p x 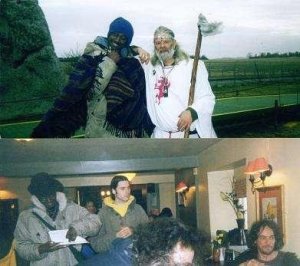 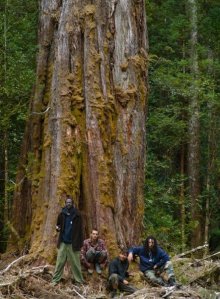 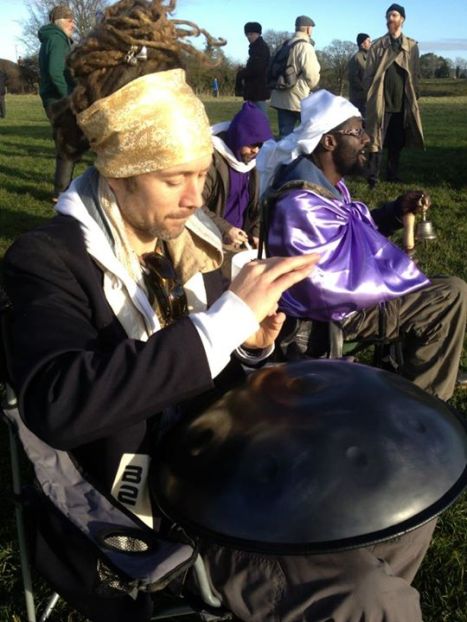 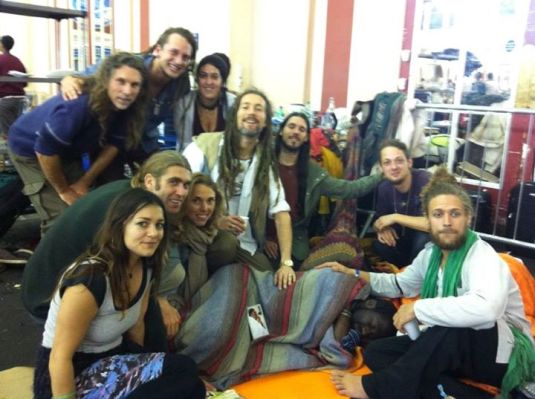